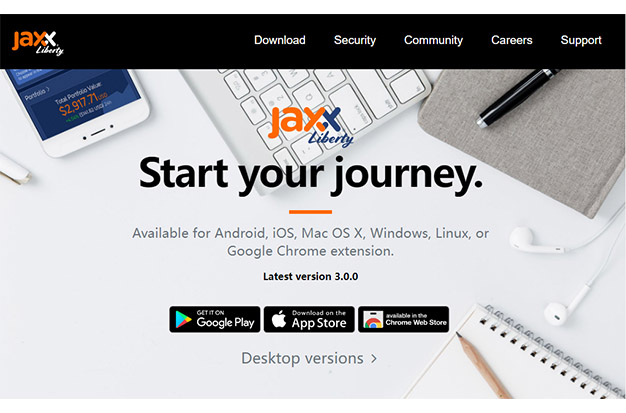 Trading cryptocurrencies is now becoming more and more popular and accessible. A fresh avenue for financial growth and investment is cryptocurrency. Cryptocurrencies, however, cannot just be kept in banks, physical locations, or hardware wallets like fiat money can. The digital wallets that traders must use to store their digital currency. Because of its straightforward accessibility and numerous security measures, Jaxx Wallet is a digital currency wallet that is quickly growing in popularity. To learn more about all of its services, read the Jaxx Wallet review.

What is a Jaxx Wallet?

Over 80 cryptocurrencies, including well-known ones like Bitcoin, Ethereum, Litecoin, Dash, and Bitcoin Cash, are supported by the multi-currency wallet Jaxx. Jaxx wallet is distinguished by its ability to pair across platforms, user-friendly interface, and ease-of-switch between stored digital assets, among other things. One of Jaxx’s distinctive features is its integration with ShapeShift, which enables users to instantly buy and sell supported cryptocurrencies. Additionally, by using Jaxx Liberty’s block explorer, users can follow blockchain news, track market data, and search transaction data across various blockchains.

You can probably infer from every single user Jaxx wallet review that you read that Jaxx is a digital wallet that lets users send and receive a variety of different cryptocurrencies while also giving them a secure location to store them. Anthony Diiorio, one of the Ethereum’s co-founders, developed the wallet in 2014!

One of the most well-known wallets available, Jaxx’s creators revealed in March 2018 that their product had been downloaded more than 1.2 million times!

Now that you have a clear understanding of what the Jaxx wallet is, let’s look more closely at its key characteristics and advantages in the following section of this Jaxx wallet review.

Pros And Cons Of Jaxx Wallet

While other wallets support a large number of non-fungible tokens and hundreds of cryptocurrencies across numerous blockchains, Jaxx Liberty is built for ease of use across all platforms. On computers running Windows, Apple MacOS, or Linux, as a Chrome-based browser extension, and on Android and Apple smartphones, the wallet app is accessible. By using their 12-word backup phrase or QR code, new users can create a Jaxx Liberty wallet on any device and transfer it to any other platform running the software. This enables users to manage their cryptocurrency assets whenever they want, on any device. Users can purchase, store, or transfer over 80 cryptocurrencies after creating a wallet, including Bitcoin, Ethereum, Litecoin, and the centralized exchange tokens MCO (Crypto.com) and BNB Coin (Binance).

Although the wallet is easy to use on various devices, simplicity is accompanied by a lack of features. Staking directly through the wallet does not currently allow users to earn interest on their assets, and the company has no plans to add it in the future either. The wallet also allows users to store their non-fungible tokens, but Jaxx Liberty cannot be used to directly manage them.

Jaxx Liberty Wallet Review: How Do I Set It Up?

Users must first visit the Jaxx Liberty website and download the Jaxx application that is compatible with their device and operating system before they can set up Jaxx Liberty Wallet.

Before the download starts, the user will then be given a “checksum.” To reduce the risk of a security breach, the user should make sure the checksums for their download and installation are identical. The user can find a once the download is finished. They must first open an EXE file. The Jaxx Wallet is a 65 MB file that typically downloads in a few minutes.

Jaxx Wallet will start to install on the device when the EXE is clicked. Following installation, the user will see their Jaxx Wallet open on the default page. The user’s JaxxWallet address and wallet QR code will be displayed on this page. The default page of the Jaxx Wallet opens on Bitcoins and displays the user’s balance in both bitcoins and the equivalent amount in US dollars. By navigating the drop-down menu of available currencies, users can quickly find the cryptocurrency they want to view or use.

In order to protect its users, the Jaxx Wallet has a wide range of security measures and tools. User information is not collected personally. Sensitive data breaches are prevented as a result of this. The user of a Jaxx Wallet must create a secret, private key before using it. The user will only be able to access their funds using this private key. It won’t contain any information regarding this key. The user’s native device is the only place it can be kept.

Users can easily comprehend the Jaxx wallet’s method of securing cryptocurrencies thanks to its high industry standard security architecture. Jaxx is a Hierarchical Deterministic (HD) wallet. For each receive-transaction, the wallet creates a new address, in other words. Receiver’s ability to track the transaction is hampered as a result. A master-private key functionality that was created using a 12-word phrase powers this feature. A backup option for recovering accounts is the mnemonic seed.

Jaxx stores private keys on users’ devices rather than on external servers because it is a non-custodial wallet. This makes it difficult for a third party to gain access to user funds. The bank-grade wallet encryption, which kicks in after a password is set, is an additional security measure. Despite this, it is still the users’ responsibility to create a secure password.

Jaxx wallet proves to be a respectable and secure service, but some of its features are limited when compared to other wallets available. Even so, it remains a solid choice for anyone venturing into the world of cryptocurrencies.